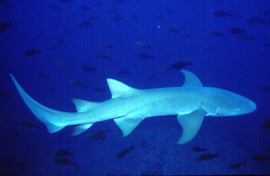 The Tawny Nurse Shark is a shark most often found in small caves and crevices resting on the bottom during the day. At the Burma Banks though (when there were sharks), the Nurse Sharks seemed to be more active and free swimming. Easy to recognise on the small eyes, very long tail almost without a lower lope and big second dorsal fin. In contrast to the carcharhinus group it probably has a poor eyesight. A free swimming Nurse Shark I observed while snorkelling at Pachumba, was showing no acnowlishment of my presence. I was able repeatedly to place myself in its path, so it passed by only centimetres from my mask, without ever knowing I was there. Another free swimming Nurse Shark, I saw scuba diving at The Andamans, came along the reef slope to a distance of 1½ meter before it suddenly realised there was a diver there. It turned around and swam away so fast, that the skin on its big body wrinkled. Can grow pretty big, up to 3 meters and is perfectly harmless although it has very sharp teeth. The divemasters when there were sharks at Burma Banks handled these sharks as dogs, but if you are not careful they can bite, which I saw on one occasion. The shark, thinking it was biting the fish in the divemasters hand and not the hand itself, let go immediately leaving a good set of teeth marks in the hand.

In Thailand the best chance to meet nurse sharks probably is at the Similans, Hin Phae Reef but they are very rare now.