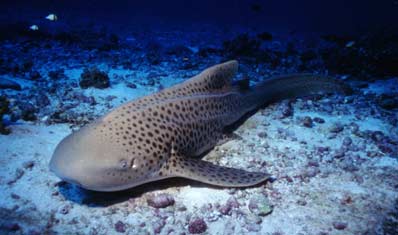 A Leopard Shark near Koh Born

Was a quite common bottom resting shark until recently. Has a rounded snout and black spots. Not white spots as the much bigger Whale Shark. The very long tail lack the lover lope. Only the small rarely seen juveniles have stripes, supporting the name Zebra Shark. In Thailand they were until recently very often spotted at Shark Point between Phi Phi Islands and Phuket. At Similan Islands the species was found most often below 25 meters of depth, Triple Arch and Boulders probably being the best places to spot them. Surin Islands was never the best place to look for Leopard sharks.
Could quite often be seen in mating behaviour: the smaller male following the female, its mouth at the females tail. Sometimes the female turned around belly up when the male was gripping the tip of the females tail in the mouth, and they both came to rest on the bottom.
Nowadays unfortunately the population of Leopard Sharks in Thailand is only a fraction of what it was in the 90'es.

A graceful shark up to 2,5 meters feeding mostly on molluscs and crustaceans. Not shy. 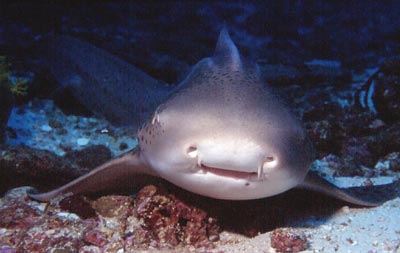