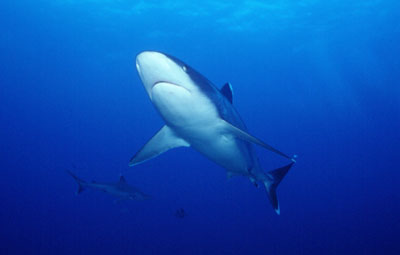 A Silvertip Shark at Burma Banks.

The prototype of a "real" shark. A big, muscular, fast and restless ocean shark. Despite the white tips, it cannot be mistaken for a Whitetip Reefshark. It has a different shape, is more bulky and has white tips on the pectoral fins as well, which the Whitetip does not. Very rarely found near the coast except if the water drops to very deep. In Thai waters I have only on two occasions been lucky to see Silvertip Sharks. Within the same week, I saw first two and later one small Silvertip Shark swimming high in the water column near Chicken Hair Reef. Otherwise the Burma Banks is the closest to Thai waters to see the Silvertip Shark, but with the dynamiting and shark fishing going on there at the moment, it may be only a matter of time before that spectacular sight is lost. Already today it is by no means a sure thing to see silvertips on a Burma Banks trip. In the early 90's there were plenty here. When the Silvertips grow old the eyes turn from light grey to dark. Like the Grey Reefshark, and the Blacktip Reefshark some of the old females show quite a few scars on the posterior part of the body. A result of the male love bites while mating.