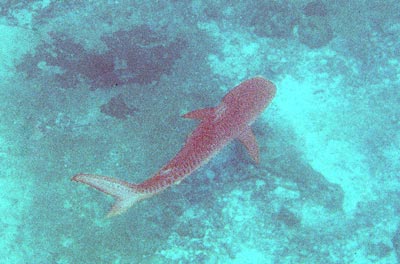 A poor photo of a young Tigershark cruising along in shallow water, Surin Islands.

Very rare in Thai waters. Mostly found in deep and cooler water, where big-game fishing boats some times catch them. Very few divers have met a Tiger Shark in Thailand.
I have seen Tiger Sharks on three occasions. First time it was two 1,7 m. juveniles, which had lovely black vertical stripes on their bodies. They were swimming together just above the sandy bottom near a reef in only 10 meters of water at Surin Islands. They both took off, one of them quicker than the other, when I dived down to get a closer look. The photo is very poor, I know, but it is the best out of three, which I managed to shoot on that sole occasion with the timid sharks. Look at the rounded snout and the black stripes on the body. 11 months later at the same spot, a Tiger Shark about the same size came slowly cruising my way near the bottom. As soon as I dived down towards it, it turned and swam quickly away. In some parts of the world Tiger Sharks are dangerous.
Feeds on fish, turtles, in fact all kinds of organic matter and sometimes even inorganic stuff.