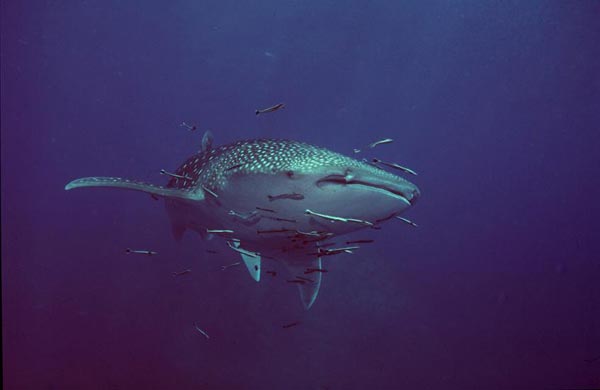 Thailand was until recently one of the best places in the world to spot this shark, the biggest of all fishes. It is a huge gentle active plankton feeder, which surrounds schools of small fish and (in some waters) shrimps, and then engulf them by the thousands. Is often followed by remoras and Cobias. Was every year, especially in the spring, seen from Hin Daeng, Racha Islands, Phi Phi Islands, Patong (Phuket), to Similans and Surin Islands.
In the Similans-Surins area most Whale Sharks are seen around Koh Tachai and Richelieu Rock. The sightings at Richelieu Rock dropped markedly in the 1996-97 season coinciding which a huge increase in visiting dive boats. Only very few sharks were seen there compared to earlier years. But it was hardly surprising with 4-5 boats there most of the time in the high season. Some of them moored right at the rock all day with engines (for aircon) creating a lot of noise. Many operators at that time did not discourage their divers from touching the sharks.
In the 1997-98 season the sharks were again spotted very frequently, and this may very well be due to the fact of hard efforts to keep divers from touching and disturbing the big animals. Please don't ride the Whale Sharks. They will dive and disappear, as they really don't like it. Watch and enjoy, and the Whale Sharks will stay.
The place of all places I have seen most Whale Sharks is the crowded tourist bay of Patong on the west coast of Phuket. In December 1993, early spring 1996 and again in December 1997, the bay was feeding place for at least 5-6 Whale Sharks, which was seen by an increasing number of snorkelers and longtail- and jet ski riders every day for several weeks. Eventually the small yellow fish, they were feeding on, became scarcer as the annoyance from spectators grew bigger, and one day the gentle giants were gone. None of them would be followed out to sea by the big Cobias, which accompanied them into the bay, as these were quickly shot by spear gunners. 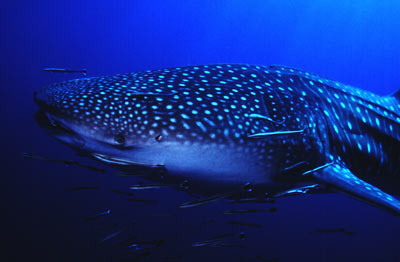 Whale Shark with lots of remoras around it.

In 1993 one of the Whale sharks were severely wounded by the propellers of probably a speedboat. That did not happen in 1996, and the longtail drivers (who made a small fortune taking people out to the sharks only a couple of hundred meters from the beach) really tried not to disturb the sharks too much. The major danger to the Whale Sharks (and the swimmers) were the big speedboats, and again in 1997 one of the whale sharks were injured, probably by a speedboat. The sharks could be seen when they, after having surrounded and packed a school of fish together, started to eat them from below coming to the surface trashing their big tails around.
I was swimming about 1 meter from the mouth of a whaleshark. In front of it was several thousands small yellow fish. They were not panicking, maybe because the shark was too big to be associated with dangerous predators. The shark opened the mouth and many hundreds fish was sucked in. I looked inside the mouth and saw they were still swimming along, same direction. The big mouth shut, and when it opened again, none of the fish were there.
A big cloud of bubbles from a diver sometimes fools a Whale Shark into the belief, that it is small fish, and it will go for them engulfing them while following them to the surface. This I have watched on several occasions at Richelieu Rock.

Something sad has happened recently. The markets, especially the Chinese has opened up for using whale Shark meat and Whale Shark fins and the price has gone up makedly. As a result the fishery directly after Whale Sharks has exploded. The Taiwanese markets now sell Whale Shark meat as Tofu Shark. The biggest fisheries after Whale Shark is going on in India, where in 1998 along one coast more than 1000 Whale Sharks were killed. No regulations whatsoever. The fishery goes on today.
In the Phillipinnes the Whale Sharks are also hunted allthough they are protected by law. The fines are far too small to stop the killings as you can get more than 10 times more for one Whale Shark.
In Thailand there is no tradition for catching these animals. In my time there I have never heard of one being captured. It is the same in neighboring countries as Burma and Malaysia, but recently local fishermen has caught Whale Sharks for money offered by foreign businessmen who resale the meat to Japanese and Chinese dealers. For that reason Burma has now made Whale Sharks a protected species. We can only hope that the law some day can be enforced.
We have a couple of times observed Whale Sharks with a rope tied around the tail. This will eventually kill the shark as it slowly but surely cuts of the tail. On one of the sharks it already cut 2-3 centimetres into the flesh.
The Taiwanese, who operates huge fishing boats all over the world with big driftnets, are known to take every living creature in the sea. Even Whale Sharks. In 1997 a Taiwanese fishing operation fishing the North coast of Sulawesi caught with big driftnets a numbert of Whale Sharks (and hundreds of other big creatures as Mantas, dolphins e.t.c.). This has now been stopped.

On Whaleshark.org There is a big photo ID file the individual whale sharks are identified. If you have photos of whale sharks, please mail these to this site.

Go to Observations of whale sharks