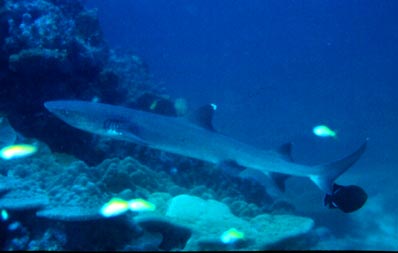 A Whitetip Reefshark at Burma Banks

This is probably the shark seen most often by divers. But also this shark has dropped a lot in numbers recent years and is rarely seen. In the 80's the sound of the dropping anchor chain at the Similans always attracted whitetips who would be there when divers went in the water. Today you have to be lucky to see one.

A very slender shark with white tips on dorsals and upper tail lope. If a shark is seen resting on the open bottom, it will most often in Thai waters, be a Whitetip Reefshark. The 2 other common sharks with the same ability is the Leopard Shark and the Nurse Shark. The Whitetip also likes, as the Nurse, to hide in caves and crevasses. In Thai waters they are normally found deeper than 20 meters, but I have seen them up to 3 meters from the surface while snorkelling. Is moderately shy, and normally disappears shortly after, it has been discovered by divers. A night active shark, which green eyes sometimes can be seen reflecting the light from the dive torch. The best place to see Whitetips in the Similans was before around Elephant Rock. Stonehenge used to be good too.