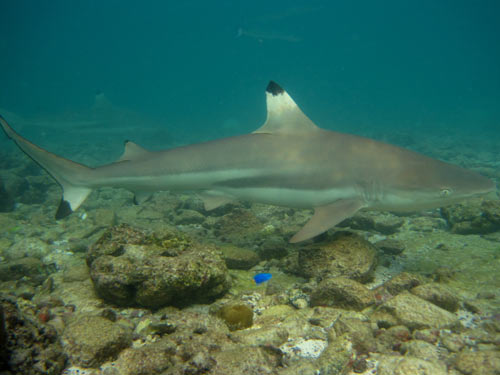 A beautiful strong little shark which prefers very shallow water. Easily recognised by its black tip on the first dorsal fin just above a light almost white fin-area. Eats mostly fish which are caught in some lightening attacks through the fish shoals on top of the reefs. It gives birth to from 6-10 babies after maturing at 1,1 m. of length. Sometimes the new-born babies can be seen for months cruising up and down in the surf as shallow as can be on deserted beaches of the Similans. Unable to rest on the bottom. Is normally extremely shy and best seen with snorkel equipment, as the bubbles scare this shark. The Blacktip Reefshark is very curious to knocking sounds, which is one way of attracting them while holding ones breath snorkelling.
At the Similans they were most common at Island no. 9. At Surin Islands they could be found everywhere, but especially around Koh Pachumba.
Phi Phi Islands  has a healthy population of Blacktips, although constantly threatened by fishermen selling baby sharks to tourists and shark fins to the Chinese.
Mating has been seen and photographed there by Steffen Techow in the month of February.

The population of blacktips at Long Beach I have researched for years (still do, see Photo ID) and based on photos of 150 individuals since 2005 and a re-finding og 30 % from year to year,  it looks like it has a size of ca. 150 -200 individuals which do travel around Phi Phi Dorn and the near by islands (see BT144). It is mostly adult females as aprox. 25 % of all ID-sharks have been identified as males. The males are easily recognised by the two claspers near the abdominal fins. The claspers cannot be seen on young sharks. Shark babies are born year round and mating or signs of mating have been registered in February and June-July. Even deep bitemarks that the females got during mating will dissappear completely as can be seen on the photos.

The sharks seem to stay in the area for years. Some of them like "Hannah" have been registered through 10 years. The sharks  swim alone or in small groups which split up and form many times during the day. The sharks do not show any territorial behavior. That the blacktips are in danger of disappearing is seen on the occassional fishing hook in the mouth of some of the sharks. If you want to get close snorkeling is the way.