THE FRIENDLY SHARKS OF PHI PHI 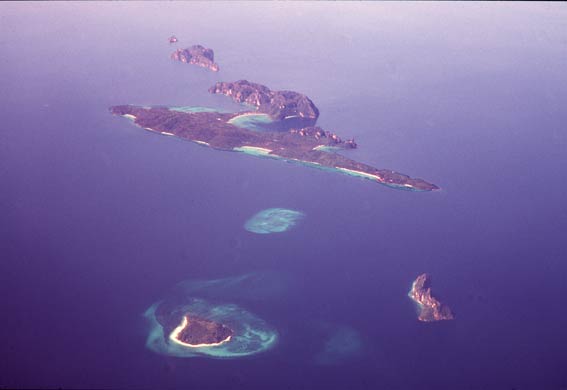 Phi Phi Islands. The Island in the bottom of the photo is Bamboo Island. 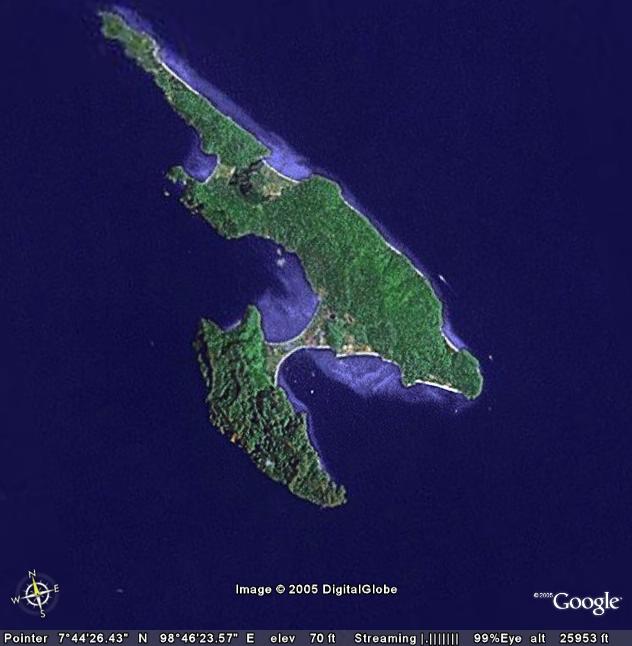 For me Phi Phi Islands is a very special place. Because of the dramatic beauty of the place but especially because there is very easy access to a healthy and thriving population of blacktip reefsharks.

If you visit Thailand as a diver or snorkeler, this is something you should not miss. Only in a few places in the world, it is possible to swim with real sharks, totally free of charge and with a minimum of trouble.
At the little rocky inslet Hin Phae at the eastern end of Long Beach, only a hundred meters from the beach, there is a healthy population of blacktip reefsharks (Carcharhinus melanopterus). This little strong shark which grows to max 1,8 meters, is what one could call a classic shark. The dorsal fin with the black tip makes it easy to recognise from other shark species. This shark loves shallow water and can be found near Hin Phae at depths between 0,5 and 5 meters.

I have for many years spend weeks every year monitoring and photographing these sharks. A project (see Photo ID.) which I thought had come to an abrupt end in 2012 when all sharks were gone. Luckily they were back the year after. 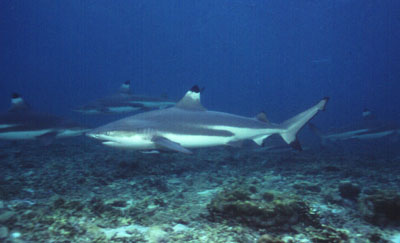 This is how you do, if you want to enjoy the sharks yourself: Put on your snorkel equipment and swim towards Hin Phae. Swim around on the inside of the inslet where the depth is arund 1-2 meters. Don't look straight down at the bottom but look up and ahead of you towards the limit of visibility. Don't splash around too much but swim quietly and watch out. A shark or two or possible more will appear if you have a bit of luck. If you keep quiet you can be lucky to have them come within 2-3 meters of distance. Enjoy the sight and remember that this shark, like 99 % of all shark species, are completely harmless.

The Blacktip Reefsharks are so shy that most places you never see them while you are scuba diving. The bubbles from the tank makes far too much noise. Snorkeling was the way. One exception to this is the blacktips around the Bida Islands and Phi Phi Leh. Probably because many of the sharks come from Long Beach and are used to people, traffic and noise.

If you want some guidance there are some dive companies in the village who offer morning snorkel trips with the blacktips for 600 - 800 B. One of the best is The Adventure Club 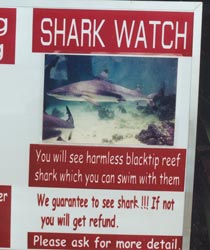 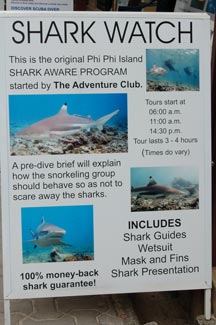 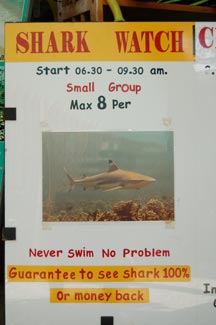 There is one thing you really have to watch out for, and that  goes for all of Thailand: Watch out for boat traffic while swimming. This area around Hin Phae has a heavy traffic of longtail boats and speed boats and even though they make a terribly noise, they can be hard to hear under water. Therefore keep an eye on the boat traffic within short intervals. Don´t think that the speed boats won´t go full speed between Hin Phae and the beach. They do this every day even when there are snorkelers in the water. 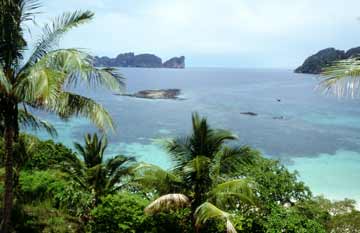 Remember: Sharks are endangered all over the world. Please tell the locals that you appreciate the beautiful animals, and that they are one of the reasons for your Phi Phi visit. Never buy baby-shark (normally new-born blacktips) or sharkfin soup at the restaurants or for that matter any other shark product.

Please let me know if you have visited Phi Phi Islands recently and maybe have seen blacktips. Go to Observations

The coral growth around Phi Phi Islands was before 1989 very dense and diverse. Especially Long Beach, with big areas of long branched staghorn corals, was fantastic. The corals here were in 1989 exposed to heavy coral bleaching. Even though many corals returned, the forests af staghorns in the shallows were gone forever. Later years had minor cases of coral bleecing setting back the coral growth, but in 2009 it looked like the corals, especially at the east side of Hin Phae, had regained their beauty. Unfortunately the very hot weather of May 2010 had as a result a massive coral bleeching in most parts of The Andaman Sea and the Phi Phi Islands were hit very hard. At Long Beach 99 % of all staghorns and 60 % of the bummie corals died. In 2016 there are still plenty of fish and many places staghorn coral colonies are establishing themselves again.  Unfortunately the local speed boat drivers apparently know nothing about conservation. They throw on a daily basis their anchors directly down on top of the very same corals the tourists pay to enjoy. Check video from July 2013.

The terrible tsunami 26'th of December 2004 which hit Phi Phi hard has had a destruktive effect on the under water environment only in the western side of Ton Sai Bay where a lot of debris from buildings and other man made things were flushed out to sea. The mid and western part of the village of Ton Sai was hit really hard and many hundred died. Long Beach and Hin Phae was almost untouched and the corals were fine.

Phi Phi Dorn Island is today threatened by waste and untreated sewage from the huge number of tourists. The unstoppable construction of buildings and roads is reducing the little space left for the original nature and wildlife on the island. Erosion from building sites, especially in the rainy season, is also a major problem for the surrounding reefs.